Project Runway for the Wii Has Now Arrived

Project Runway for the Wii Has Now Arrived 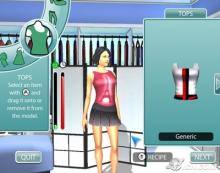 A few months ago, I wrote about the up and coming Project Runway game for the Wii, and for those of you who were eagerly anticipating the release and the chance to see an avatar of Heidi Klum herself, wait no more- Project Runway for the Wii has arrived.

The game is pretty much made for girls aged 6-12 and the NY Times writer (who may be slightly older and therefore more discerning than the target crowd) was not all that impressed with the game. In fact, I believe the exact words she used were, “It was Godawful”, which was not the opinion of Heidi Klum herself who is reported to have been pleased with her avatar.

How does the Wii version of Project Runway work exactly?

Individual competitions are introduced by Peter Gunn with specific instructions, then the “designers” must click and drag the proper clothing, apply make-up, fix up the model's hair dos and switch to the model role where they can “walk the catwalk” to show off their “designs”. The best part of the show is that the contestants are actually judged, which I actually think would be a little fun because the comments are reportedly a little sarcastic- just like on the show. As the NYTimes writer saw it, the contestants are harshly judged for originality, which is the opposite of the original show.


What do You Think about the New Shrek Fashion Photo Shoot?


Smoky Eyes are In, But is That a Good Thing?