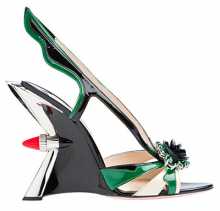 These glinting hot rods won't make you go any faster than your own two feet can carry you--in fact, in my case, they'd slow me right down and possibly trip me over--but they'll certainly give your onlookers the sensation that they've been blown past by hot chrome and a revving engine. Prada's new spring collection features a whole slew of heels all inspired by classic American cars, from the shiny details to the bold colors and decals.
I have to say, I think the little tail light-inspired tweaks are my favorite. Embedded on the backs of a number of these shoes, they almost look like little lipstick cases. I'm a little unsure on those shoes with flame detailing. Fiery graphics against a sleek back background may be a classic look for an old car, but translated to embellishments on the most elegant of shoes, the stiletto, they come off a little awkward. They almost look more like wings on the sandals of a Greek god than flames on the back of your grandfather's prized vehicle.
Still, I appreciate the mix of gendered aesthetics that's going on here. Prada's doing some interesting work by taking the traditionally masculine imagery of the hot rod car and translating it to the traditionally feminine form of the stiletto heel. It makes the viewer question the essence of each item. Both are expensive luxury possessions meant to display wealth to same-sex competitors and opposite-sex potential mates. Both are oddly sexualized through several layers of meaning: the heel in a more obvious manner by lengthening a woman's legs and attributing a sense of delicacy to her form, the car in a more metaphorical sense by implying a man's virility and strength through sheer mechanical power. The two displays of social rhetoric orbit each other in these shoes as their aesthetic bubbles up in a striking middle ground between two historically gendered realms.
Social commentary aside, though, these heels mostly just look awesome. There's no way I would be able to walk in any of them. Not ever. Manly detailing aside, they'd still be huge spikes under my heels and that's one thing I just can't add to my proprioception under any circumstances. I can take maybe three inch heels at best. But for those who have mastered the stilt-walk (and for those who find themselves able to afford the latest Prada footwear), these guys will be out in the world fairly soon.
< Previous post: