Just how old do you feel when your elementary fashion comes back in style? 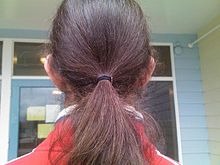 Wedging my face away from the grasp of my palm, I peek up again to see the sight yet again—little girls, ages seven and up, sporting the same side ponytail that I used to wear when I was a pre-teen. The scrunchies have been replaced with thinner, trendier hair ties, sometimes adorned with little plastic doodads, but otherwise it is the same—a ponytail on one side of the head, much like a pigtail missing a mate.

When did this happen? I feel so old all of a sudden, I suppose as old as my mother felt when her 70s pants and peasant tops came back into style when I was in high school and I really wanted my own set. It turned out that she still had a couple of such items in her closet, though they didn’t exactly fit me. Nevertheless, this odd flashback is unsettling because it’s today’s youth, not your own peers, wearing these styles—and I am sure if I went out with a side ponytail it would be considered a pretty laughable matter.

The same goes with shirt tying. Remember knotting your shirt just below or level with your navel, sometimes with a hair clip or scrunchie, sometimes by simply tying it? That’s a pretty big fashion style in schools right now from what I have seen. My best friends’ daughter demanded to have her shirt in this style the other day, and when her mom tried to tie the knot like we did when we were kids, her daughter did NOT like it! She wanted a ponytail holder on her shirt like the other girls were wearing, even though her mom told her she’d be the only one with the tie and all of the other kids would beg to have their shirts tied, too.

What’s next? Slap bracelets? Hammer pants? Leggings with stirrups covered by leg warmers and socks? Oh, I suppose I am dating myself now—even though I was born in the early eighties these fashions were still pretty hot during the early nineties when I actually cared about anything like that—but I have to laugh when I think about how today’s children will react when their own fashions come back to haunt them in twenty or thirty years. Layered tops, jeans with holes (what is it with jeans with and without holes alternating on the style-ometer anyway?)… I suppose I’ll just find out when my daughter laments about today’s fashion to me in thirty years, just as I am doing today.