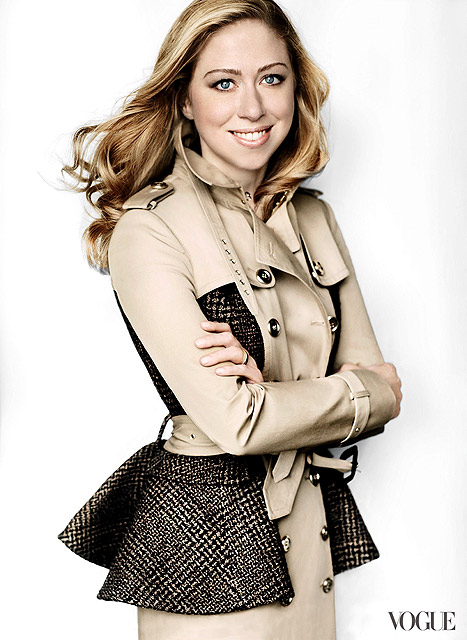 I’m old enough to remember when the talk show hosts got in trouble for making fun of Chelsea Clinton. You might think that you’re old enough, too, but you have to keep in mind that her dad Bill was the President of the United States at the time and the  Right Wing political pundits were making fun of her appearance.

If I recall correctly, Chelsea Clinton was 12-years-old at the time.

No one is saying anything like that about Chelsea Clinton now. The intellectual/politico has just been featured in Vogue Magazine for an exclusive interview, which can be read HERE.

Chelsea reported to Vogue that she would not rule out the possibility of following in her parents’ footsteps with a run for political office and I don’t think anyone is laughing now. It’s not as if one of the Bush daughters is considering a run for office.

Chelsea is exceptionally gifted, articulate and obviously benefited from the combination of her parents' brains. It doesn’t hurt that she now has a PhD in International Relations from Oxford. Growing up in the public eye has something to do with it as well; Chelsea remarked that she was asked if she wanted to be a governor. The problem, as she sees it, is that she was four years old at the time.

The Vogue interview also focuses on the personal life of Chelsea Clinton; is she now a fashionista? The answer, according to her friends, is probably now, but she is definitely more striking and fashion-conscious than she was in the past. When the writer complimented Chelsea on her ensemble, one of Chelsea’s friends said, “Don’t encourage her.”

Because of her position in the media, her association with the Clinton Foundation, and her academic role, Chelsea Clinton is fortunate enough to hob nob in circles that others wouldn’t have access to. She claims she is treated kindly and that many people are grateful for the role her father played in their lives when he was President of the United States.