The winner is announced. 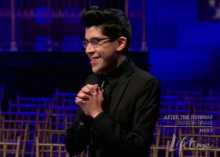 The second part of the Project Runway: All-Stars finale pitted Austin’s, Mondo’s and Michael’s six-piece collections against one another. This season really was a sprint—these designers had to complete their limited collections in a mere four days, while earlier seasons gave contestants months to complete their runway-ready looks.

Per his wacky, glammed-out design aesthetic, Austin’s collection drew its inspiration from the clothes of Hasidic Judaism combined with the sensibility of an 18th-century vampire. Nope, nobody understood that either when Austin described it at the beginning of the show.

Austin’s show consisted of models with side locks wearing either leatherette and pink ensembles, or huge, full-skirted, over-the-top dresses. He made a really beautiful wedding dress with a skirt full of mock flower petals that was his most memorable look. The judges decided that Austin’s collection was beautiful, but that his ideas were far too scattered. Rather than a single collection, they argued, Austin had started creating several.

Michael’s inspiration for his collection was, per usual, simpler than Austin’s. He made looks that would fit in on a expensive, deluxe safari, using silk leopard prints and the like. He made a number of well-draped pantsuits and dresses, but his idea was too simple to create much of interest. The judges said that his looks would sell straight off the shelves, but seemed to think that Michael’s collection was too one note.

Mondo was so stressed out by the final collection, he drew his inspiration from the idea of clinical therapy. He made his own Rorschach inkblot-patterned fabric, used maniacal polka dots and circles in each one of his outfits, and styled his models’ hair to make them seem as though they’d just escaped an insane asylum. Although the irony of the “tortured” artist forced onto the reality TV show should not be ignored, Mondo’s collection was still really cool. It was particularly cohesive with matching red sleeves, and black-and-white fabrics. His final red, white and black brocade dress was particularly impactful, but his Rorschach white dress was his best piece.

The judges first eliminate Michael because he is so commercial to be unattractive. Mondo may not have enough ideas, they argue, but Austin may not be able to edit well. In the end, Austin’s sins turn out to be more severe, and he loses, and is given a tepid second place prize of a plane ticket to Paris. Mondo is the winner—a well-deserved honor.


The Illusion of Pulled-Together