The designers learn to budget. 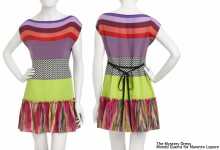 Project Runway is really coming down to the wire, so I love the completely conventional challenge that the designers have this week. I think that the emphasis on wearability and budgeting this season has been thanks to wonderful new mentor, Joanna Coles, the Editor-in-Chief of Marie Claire. She tells the designers—who are mostly gay men—that women like to wear bras with their looks or emphasized the fact that most women won’t buy dresses slit down to their navels, giving these designers a taste of the real woman consumer who they need to impress. Fashion is not only art.

This week, designer Nanette Lepore is brought onboard to help the designer talk about budgeting, and making dresses that will appeal to larger consumer bases. She speaks to each designer about keeping their designers within a price point, and subsequently, they get only a certain amount of fabric to stay within their budgets.

Despite his early struggles with sketching (he doesn’t do it) and pricing (he doesn’t get it), Mondo won the challenge, thereby securing himself a place in the final three. He makes a multi-color, multi-fabric sheath dress that would have been really cute if it didn’t have a weird, curtain-like pink ruffle at the bottom of the dress.

Joining him in the top three is Austin who made a burgundy-colored raincoat with a little tie around the middle. I really wanted to see Austin’s collection, but there is something lost in translation from the actual runway to the television screen. His outfit looks rather sad sack on my computer screen.

On the bottom two are Kenley and Michael. Kenley made the same dress again—which actually works for this challenge—but uses a bright purple peacock feather print that she doesn’t fit together particularly well. The judges call it dowdy. Michael makes the same dress he made for the gelato challenge—will the judges ever crack down for this—a low-cut, flowing Grecian-style dress in a beachy blue-and-green pattern.

In the end, Kenley is sent home, and Michael is sent to fashion week. We’re not entirely sad to see her go—there were many designers with more range than Kenley’s who were sent home long ago.

Next week’s finale episode looks really exciting, with the contestants having to write for Marie Claire magazine, as well as design new outfits spur-of-the-moment for their fashion week collections. Will you be tuning in to see who is crowned Project Runway: All-Star?


The Illusion of Pulled-Together


When Thin is Deadly